Only the Chosen May Wield 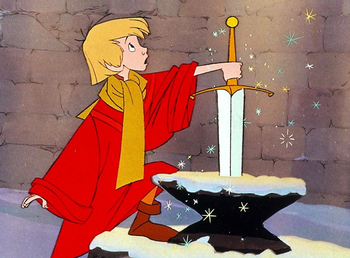 Whoso pulleth out this sword of this stone and anvil is rightwise King born of England
"Whosoever holds this hammer, if he be worthy, shall possess the power of... THOR."
— Inscription on Mjölnir, The Mighty Thor
Advertisement:

In a fantasy story, or sometimes even a sci-fi series, there will be certain special items that only an attuned person can use. The most famous of these is the Sword in the Stone: Only King Arthur could remove the sword from the stone in which it was lodged, and thus proved that he was the true king of England.note Naturally enough, this is often assumed to be the same sword as Arthur’s famous blade Excalibur; see below for multiple examples. However, as it isn't the only story about how Arthur acquired Excalibur, this isn’t certain. Depending on the Writer is Older Than Print, after all. That being said, in some cases anyone could wield Excalibur, but only Arthur could remove it.

May be the first evidence of Because Destiny Says So or The Chosen One. Such an item may also be The Chooser of the One. If the wielder also happens to be The Chosen Zero they might also be The Team Benefactor by virtue of providing access to it.

A Sister Trope to Only the Worthy May Pass. Compare Situational Sword, Finders Rulers (which this trope can result in). See also Only the Chosen May Ride.

Alternative Title(s): Sword In The Stone