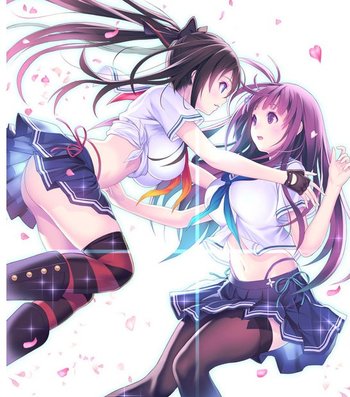 Rinka and Ranka Kagurazaka
A mysterious illness suddenly broke out on girls in their teens and twenties, enhancing them mentally and granting them the ability to turn their bodies into extremely lethal weapons. The cause of the illness was a particular virus currently classified into two types: “A-Virus” and “V-Virus”
The World Government enacted a law to care for patients infected with the virus. Five secret artificial islands were established to quarantine the infected patients.
Advertisement:
One such quarantine island: Bhikkhuni.
The island famous for successfully controlling the “V-Virus”. Girls who enroll in Bhikkhuni’s school can overcome the virus. And thus, it is a school with many hopeful applicants. Among them is a pair of sisters infected with the “V-Virus”.
The elder Rinka Kagurazaka, whose innocent graces hide her power within.
The younger Ranka Kagurazaka, whose outgoing energy belies her frailty.
They are still unaware there is only one way to control the virus.
And that is…for infected patients to battle each other.
Game’s Introduction

Valkyrie Drive -Bhikkhuni- is the videogame side of Marvelous' Valkyrie Drive project. The game has spawned an interquel manga called Bhikkhunism and ongoing manga sequel/AU for mobile phones called Otherside.

The game is set in the same universe as Valkyrie Drive: Mermaid but in a different island, the eponymous Bhikkhuni. This island is famous for being the only one to have its inhabitants successfully gain control over the Armed Virus’ infection. Rinka and Ranka Kagurazaka -our protagonists- are recent arrivals to the island and can't wait to finish the island's program to cure their infections and return home. But soon enough they discover there is more than meets the eye and that obtaining a cure might be harder than they thought...