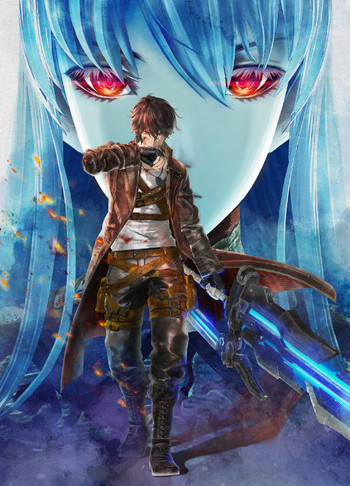 The Hero who faced the reaper? Or a traitor driven by revenge?
Here lies the Circle of Five, whose vengeful actions brought forth an inferno of war. With their execution, the blood of the brave legions is redeemed, and a just peace born. They rest eternally in the land of their birth, by the grace of the Holy Mother.
— Gravestone engraving of the remains of the Five Grand Criminals buried.
Advertisement:

Valkyria Revolution, known in the Japanese market as Valkyria: Azure Revolution, is a spinoff game from the main Valkyria Chronicles series. It was developed by Media Vision, published by Sega, and released on the PlayStation 4 and the Vitanote Outside Japan, it's only released in PSN stores as a digital release. in all territories with the Xbox One version being released in all territories except for Japan.

Europa has experienced an Industrial Revolution-like event that resulted in the great use of ragnite. One of the countries that has benefited from this is the Ruzhien Empire, which has occupied a number of countries including Jutland under the rule of Emperor Claudius Powlovich Kiev and the the Four Commanders. Not wanting to remain under Ruzhien control while suffering from sanctions under an economic blockade known as the BRFH Blockade, Jutland has launched a war of independence to get rid of Ruzhien occupation. One of those involved is Amleth Grønkjær, a Jutlander military officer who serves in the Jutlander Army's Anti-Valkyria Squad known as Vanargand, which is in charge of spearheading the war effort from the military side. In response, the Ruzhien Army has acquired the services of a mythical Valkyrie named Brunhilde.

In the midst of the incoming war, five individuals known in modern Europan history as the "Five Traitors" work in the shadows behind their fellow Jutlanders to bring the war home so that the Ruzhien Empire can be taken down while looking for a woman named Maria Schmeichel, who was kidnapped by Emperor Claudius when he was still the Ruzhien Crown Prince.