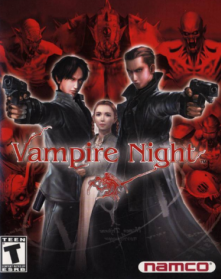 Vampire Night is a Light Gun Game and a joint collaboration between Namco and Sega (Under the WOW Entertainment label) that was later ported to PlayStation 2, published by the former

The game takes place in an Alternate History version of 2006 where everything looks like the 19th century. Two Dhampyrs named Light (or Michel) and Shadow (or Albert) are on a mission to kill the Vampire to end his reign of terror from a local village.

Not to be confused with Vampire Knight.