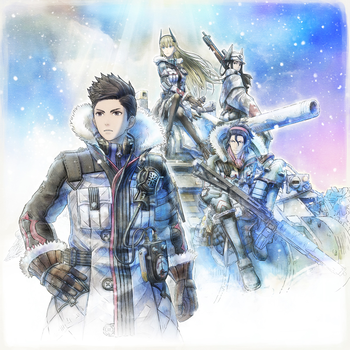 Winter is coming.
"The day our hometown burned, that was the day we enlisted. At last, we had something to believe in, something worth fighting for. It was a battlefield, but it was where we grew up."
— Claude Wallace
Advertisement:

Valkyria Chronicles 4: Eastern Front is the fourth game of the Valkyria Chronicles series. It was released in Japan on March 21st, 2018 for the PlayStation 4, with a worldwide release on September 25th, 2018 that also included the Xbox One, Nintendo Switch and PC platforms. This game marks the return of the series to mainstream consoles (not counting the spinoff Valkyria Revolution), and is set in the same timeline as the first Valkyria Chronicles game.

The game returns to the events of the Second Europan War of EC 1935, which focuses on the Atlantic Federation, the major power fighting against the East Europan Imperial Alliance, as the two vie for dominance of the Europan continent in their quest to secure Ragnite, a strategically important resource. Three months into the war, the Federation begins losing ground against the Empire's might, forcing them to enact Operation Northern Cross, a desperate gambit to end the war by raiding the Imperial capital.

Joining the offensive is Claude Wallace, a tank commander in the Atlantic Federation's Edinburgh Army 101st Division Platoon E, who fights to end the war and take back his homeland. Together with his comrades in Platoon E including his estranged childhood friend Riley Miller, prodigy sharpshooter Kai Schulen, and the hot-blooded Darcsen Raz, they undertake a campaign that will take them across the frozen north as they fight against the numerically superior Empire. Compounding matters is the presence of the Imperial Science Institute's X-0 unit, who fields modified superhumans led by a Valkyria against the Federation.

open/close all folders
# to M
N to Z
Feedback

In her anger about Imperial Troops' sexist remarks, Riley gets out of the hot spring to yell at the guys, forgetting one crucial detail... SHE'S NAKED!

Example of:
Naked People Are Funny

In her anger about Imperial Troops' sexist remarks, Riley gets out of the hot spring to yell at the guys, forgetting one crucial detail... SHE'S NAKED!