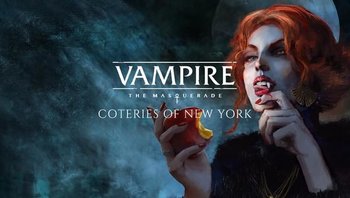 Coteries of New York is a single-player narrative experience, set in a rich, fully licensed universe of Vampire: The Masquerade (specifically Fifth Edition) and set in the World of Darkness by White Wolf. It was developed by Polish game designer Draw Distance.

The game presents the struggle for power between two vampiric factions: Camarilla and Anarchs among the iconic buildings and night lights of Big Apple. After a traumatic transformation into the undead, your character finds themselves alone and friendless in the hostile territory of New York City. Directed to a nearby park, you encounter a vampire who advises you to do the one thing that might keep you alive: make a coterie of fellow vampires. Stronger together, you and several friends might just be able to survive your unlife a bit longer than separately. Each vampire you meet will want something and has different motivations, though, which might bring you closer to Final Death than away from it.

The game notably incorporates elements from the New York by Night supplement that was published for the tabletop RPG.

It was released for computers on December 11th, 2019. It has since been released on Xbox One, PlayStation 4, and Nintendo Switch.

A stand alone expansion — Shadows of New York, featuring a new playable character from the Lasombra clan — was released in 2020.