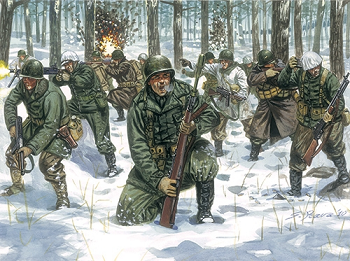 Hell frozen over.
"I remember thinking about those comrades, struggling through the cold and the snow, facing death at every turn. And I was ashamed, for I was happy that I was not with them"
— Lt. Romanov, World in Conflict: Soviet Assault
Advertisement:

Wars are already messy, but if you're unlucky you'll have to fight two enemies: the opposing force... and the weather.

Come wintertime, you better hope you're not in a place known for constant blizzards. Winter or arctic warfare is one of the most notorious kinds there is. Freezing temperatures, heavy snow, ice. This can play havoc with vehicles, which have to be kept running all the time or at least started up a lot. This, naturally burns fuel. Infantry have it the worst. They will need warm clothing, blankets, something to generate heat, extra food, and shelter. Lacking any of these can mean trouble.

During times like these you can expect to see specially trained soldiers starting to come out of the woodwork. Men and women who are hardened for the cold and can be relied on in these situations. They may often employ skis, or snowmobiles.

If you're really unlucky, you may find yourself in a winter battle that takes place in a city or on a mountain. Urban Warfare is just as notorious and has its own trope. Combat in the mountains is just as bad because of the terrain. Better hope you're not fighting in a city, on a mountain, in the snow. This is why nobody invades Switzerland.

In fiction, winter battles can be used a lot because it can really drive home just how hard the heroes' fight really is. If it's a work based on a Real Life event, then a winter combat scene will show up simply by virtue of whatever unit they are following being part of some kind of winter offensive. Video games will often incorporate it because it gives them a chance to whip out some cool winter gear, like snowmobiles.

Sister trope to Urban Warfare. Compare Weather of War, which is a more generalized version of this; Hostile Weather, which is also a generalized version that covers non-military settings; and Battle in the Rain, where instead of a snowy winter you have a rainstorm. Contrast Battle Amongst the Flames. An Ass-Kicking Christmas might overlap here if it revolves around Christmastime. Contrast with Jungle Warfare, where it's the heat and the humidity (aside from the jungle itself) that can kill, as well Desert Warfare, where it's the heat and vastness of a desert that can kill.

Alternative Title(s): Battle On The Ice