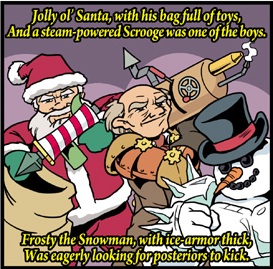 It's the most action-packed time of the year.
"Because this is what you think of when you think of Christmas, right? People beating the shit out of each other."
— The Nostalgia Critic's review

of The He-Man and She-Ra Christmas Special
Advertisement:

A work/episode/story takes place during Christmas-time, and it's action-packed. "Peace on Earth, Goodwill towards man" kind of gets left by the wayside when some people just want some good, old fashioned fights and explosions. Maybe they're finding a way to channel their aggression from shopping? This is a common occurrence when action/adventure-oriented shows want to do a Christmas Special, but they know the viewers are tuning in expecting some ass-kicking action. If there's a soundtrack, The Nutcracker will be optional. Carol O' the Bells is indispensable!

This is only about action works. The way to know is if you take the Christmas elements out, it would be straight-up action.

And even if a work isn't directly about Christmas, a lot of action works get some of their best business around this time.

Can overlap with Badass Santa (would be a Sub-Trope, but sometimes a work with that trope takes place at other times of the year), Did I Mention It's Christmas? (if the Christmas elements aren't remotely integral to the story, just mentioned occasionally) and Santabomination (when the heroes discover the hard way that Santa is a murderous monster and must fight to survive). May involve instances of Chaos of the Bells.

Compare Saving Christmas, Twisted Christmas (especially if it has a Downer Ending).