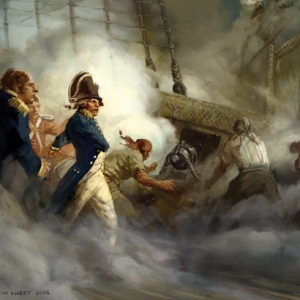 "England expects that every man will do his duty!"

"Heart of oak are our ships, jolly tars are our men,
We always are ready; steady, boys, steady!
We'll fight and we'll conquer again and again!"
— David Garrick, "Heart of Oak"
Advertisement:

A setting and an era, which has become a genre almost unto itself.

In the Age of Sail, life onboard tall ships was hellish to the extreme, by modern standards. Voyages could last up to several years, sanitation was almost nonexistent, the food consisted of weevil-infested, rock-hard dried bread and salt pork, scurvy and other diseases ran rampant, discipline was harsh (A Taste of the Lash was a common punishment for even minor infractions), and death almost certain. And this is before we even get into the battles with two ships slugging it out in brutal close-range broadsides.

The men who survived these times were tough as nails.

Expect stories set in this world to be filled with hard, uncompromising men who are covered in grime, with awful teeth, wooden legs, and stringy dirty hair. They will be drunk much of the time, usually off rum or grog,. Naval officers, on the other hand, drink port and brandy, and are often shown with noble, stiff-upper-lip attitudes, following a code of honour. They may Talk Like a Pirate, and are quite likely to actually be pirates or, if not, fight them.

Despite spending most of their life on the high seas, only a few sailors from this age could swim. Few captains cared to teach swimming to their men,note though for the sake of cleanliness, impromptu shark-proof pools were occasionally rigged from a sail suspended in the water, and the vast majority of sailors expected a quick death if falling into the sea—swimming would only serve to draw out their inevitable death if no help was forthcoming, as it often wasn't.note What captain would halt a thousand-man ship-of-the-line-of-battle (something almost impossible to do quickly anyway) to rescue a single enlisted man who'd fallen overboard? Much less in the heat of battle? The chronicles of 16th century sea-life describe swimming and free-diving as valued skills because they were so rare—something true even in the heyday of this trope in the early nineteenth century. The state of swimming skills remained woeful at least partly because it was believed that teaching one's (largely press-ganged or shanghaied, and much-brutalised) ratings to swim would only encourage them to literally jump ship and desert when close to shore.

This trope generally involves a Used Future sort of vision of the age of sail, with dirt, grime, barnacles, scurvy, floggings, and other unpleasant aspects of the real time period not glossed over. If a ship or its crew are suspiciously well-scrubbed and well-fed, it's not this trope. But tales of action and adventure abound, with swashbucklers, pirates, heroes and villains and damsels in distress all around.

Chronologically, this setting ranges from the beginning of the Age of Exploration in the mid 15th century to the replacement of wood and sail by iron and steam in the mid 19th century. The lion's share of works in the genre, though, are about either The Golden Age of Piracy (c. 1680-1720) or the French Revolutionary and Napoleonic Wars (1793-1815). See History of Naval Warfare for more information.

Not to be confused with the Avalon Hill Board Game of the same name, which is where we got the trope name, or with Schizo Tech settings where wood ships coexist with Tony Stark (Though you might want to check Ocean Punk if the idea tickles your fancy). The phrase shows up at least as far back as the late 19th century,

making it Older Than Radio.

Stories that exemplify this trope: