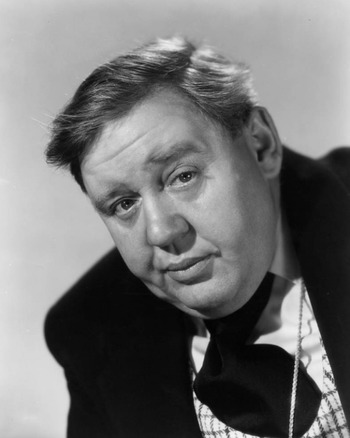 "Charles Laughton...was probably the greatest film actor who came from that period of time. He had something quite remarkable. His generosity as an actor, he fed himself into that work. As an actor, you cannot take your eyes off him."
— Daniel Day-Lewis
Advertisement:

Charles Laughton (1 July 1899 — 15 December 1962) was an English actor who appeared on stage and in Hollywood films during the golden era. He was also known for being married to fellow actress Elsa Lanchester (best known as the Bride of Frankenstein) from 1929 until his death, although he was bisexual, and Elsa was accustomed to his affairs with men.

The son of hotel keepers, he learned that business before joining up to fight in World War I, during which he was hit with mustard gas. He would never talk about his military service. He studied dramatics at the Royal Academy of Dramatic Art, where one of his teachers was Claude Rains.

Among the decidedly eccentric roles he took on were Henry VIII in 1933's The Private Life of Henry VIII (for which he won the Academy Award for Best Actor), Captain Bligh in 1935's Mutiny on the Bounty, Quasimodo in 1939's The Hunchback of Notre Dame and (later in his career) Senator Gracchus in Spartacus. Alfred Hitchcock once listed him among the most difficult things to photograph, along with dogs, babies and motorboats.

He was also a respected theatre actor, most famous for his production and collaboration with Bertolt Brecht for the American version of Galileo (directed by Joseph Losey). Laughton's performance greatly impressed Brecht who noted that "Laughton’s fear of offending the audience (mostly on religious matters) was often in conflict with his desire to correct the public’s false assumptions – normally the latter desire prevailed."

It was his lifelong regret that he was not a handsome man. He had a deep appreciation for beauty and the finer things in life, but believed he looked like a "departing pachyderm".note He was not always overweight, as you can see in Mutiny on the Bounty in 1935, Ruggles of Red Gap, also in 1935, and the 1936 Alexander Korda biopic Rembrandt. Nonetheless, Marilyn Monroe, who played the young prostitute in the "Cop and the Anthem" segment of O. Henry's Full House (1952) opposite Laughton, said he was the sexiest man she'd ever seen; and Marlene Dietrich was thrilled to be working with him in Witness for the Prosecution.

He has a terrific What Could Have Been in Josef von Sternberg's attempt to film I, Claudius in 1937. The outtakes can be seen in the 1965 documentary The Epic That Never Was.

He was a successful theatre director, whose biggest hit was a Broadway adaptation of The Caine Mutiny, and was also the director of ONE movie, the 1955 thriller The Night of the Hunter. It did so poorly that he never got the chance to direct another film.note At least one other project fell through, and Laughton's declining health was also a factor. However, the film was eventually Vindicated by History, and today it is considered to be one of the greatest thrillers ever made.

One odd bit of trivia: he filled in as guest host on the episode of The Ed Sullivan Show on which Elvis Presley made his first appearance (Sullivan was recovering from a car accident).

Laughton died from cancer in 1962.

A Large Ham if there ever was one.

Films with TV Tropes pages include: