Film / Witness for the Prosecution 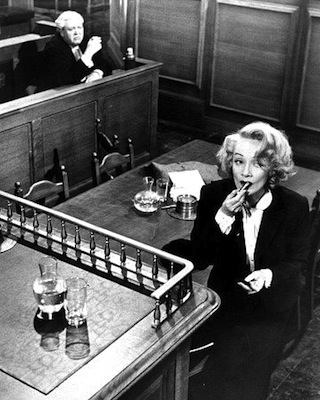 Leonard Vole: But I've done nothing! This is England! You don't get arrested or convicted for something you haven't done!
Sir Wilfrid Robarts: We try not to make a habit of it.
Advertisement:

Leonard Stephen Vole, an amiable and good-natured blood donor with an excellent war record, has been charged with murder. The victim: Miss Emily French, a lonely but wealthy widow with whom Leonard had become friendly recently. Unfortunately for Leonard, it is revealed that Miss French had left Leonard eighty thousand pounds, making for quite a motive. Leonard's case rests entirely on circumstantial evidence, and his acquittal relies on the testimony of his cold and calculating German wife, Christine Vole (her first name is Romaine in the short story and play), who is the only person who can provide an alibi. Leonard and his solicitor seek the advice of London's best and most experienced barrister, Sir Wilfrid Robarts, who takes Leonard's case himself despite his rapidly deteriorating health.

What follows is a three-day trial, during which time the prosecution makes a convincing case for Leonard's guilt and Sir Wilfrid attempts to prove his innocence. After some time, a surprise witness is called, and twist after twist keeps everyone in the courtroom — and the audience — on the edge of their seats.

The film version was directed by Billy Wilder and starred Tyrone Power as Leonard, Marlene Dietrich as Christine and Charles Laughton as Sir Wilfrid. Tyrone Power's last film, as he suffered a fatal heart attack on the set of his next production, Solomon and Sheba.

A 1982 TV Movie adaptation featured Deborah Kerr as Sir Wilfrid's vigilant nurse, Ralph Richardson as Sir Wilfrid, Diana Rigg as Christine Vole. Donald Pleasence as Mr. Myers, Wendy Hiller as Janey Mackenzie and Michael Gough as the judge.Incidentally, as this film is over 50 years old, nothing below is spoiler-tagged. If you ever plan to see it, don't read anything further.

Alternative Title(s): The Witness For The Prosecution