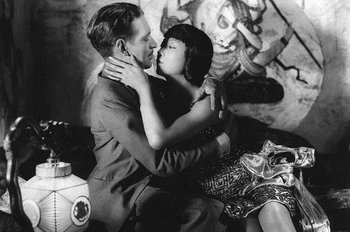 Valentine Wilmot (Thomas) is the owner of the appropriately named Piccadilly Club in the Piccadilly Circus neighborhood of London. His star act is the dance team of Mabel and Vic. Mabel (Gray), as it happens, is his girlfriend. So when Wilmot notices Vic getting a little too affectionate with Mabel, he fires Vic. This turns out to be a blunder, as Mabel dancing by herself is not enough of an attraction, and business drops off dramatically.

Enter Shosho (Wong), a Chinese scullery maid whom Wilmot had fired after he caught her dancing in the scullery instead of washing dishes. With business hurting, Wilmot re-hires her, this time as a dancer in an exotic Chinese costume. Mabel, who is being upstaged, is jealous. She is even more jealous when she sees the growing attraction between Shosho and Wilmot, as is Jim, Mabel's Chinese would-be boyfriend.

Two future stars have small parts in the movie. Charles Laughton can be seen as the patron who complains about his dirty dinner plate, which gets Shosho fired. Ray Milland appears as an extra in the nightclub.