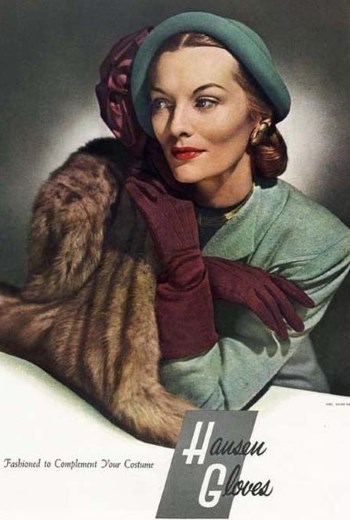 She wouldn't be naked without her gloves, just not quite as fashionable.
"Long, white evening gloves. The easiest shortcut to elegance."
— Variety: The Complete Book of Oscar Fashion
Advertisement:

Fancy gloves, whether heavily decorated or made of a single expensive material, are some of the most subtle, but important, signs of luxury. People of high class, or wanting to look high class, will often include fancy gloves as part of their look. They aren't big and flashy like other luxury clothes, but they will be noticed by the people who "matter".

These gloves can be of any length, from just below the wrist to above the elbow, though gloves for men have less variation. Regardless, knowing which to wear is often a sign of true Old Money. The required lengths and styles for any event were unwritten rules, sometimes shifting from season to season. Those that wore the wrong kind of gloves were a surefire way to identify "the riffraff". Though a girl can learn about the right gloves to wear at a Royal School.

Such gloves are rarely worn for practical reasons. If they are, they will be Stylish Protection Gear (such as a lady's winter gloves being lined with fur). Though even gloves without practical purpose do help protect the hands... from looking like peasant hands. When Idle Rich hands do little work as it is, gloves further make sure nothing will callus them. As such the hands of some upper class characters look soft and delicate (and will give away such characters who are trying to hide their status). An exception to this latter clause is when a lady wears fancy gloves when Kicking Ass in All Her Finery. The gloves themselves may get bloody when she punches someone's nose in, but her tough hands will stay immaculate.

This trope was at its height from The Gilded Age to The '60s, when they were considered a necessary part of Society style. Before and after those times, fancy gloves were an optional luxury. Yet today certain Society events today still require gloves (such as many debutante balls).

As with most luxuries, fancy gloves are not limited to the upper class (just the fanciest are reserved for them). Even servants might wear gloves if the setting is formal enough. Otherwise gloves can be seen in many formal places and events. Some military corps even require gloves as part of their dress uniforms.

These can also overlap with Tricked-Out Gloves, as a glove studded with jewels can be a great way to camouflage the laser or Power Crystal built in.

A Sister Trope to Glove Slap (since gentlemen would use fine gloves when showing their displeasure), Conspicuous Gloves (a character always has one or both hands covered).

Compare Everything's Sparkly with Jewelry (another luxury with usually little practicality), Little Black Dress (a fashion that also signals elegance without being extremely fancy), White Glove Test (doesn't require gloves, but if it does they will be fancy ones), Nice Hat, Nice Shoes (both also practical, but fancy, fashion items).

Not to be confused with White Gloves (which is an animation convention, not a fashion one).