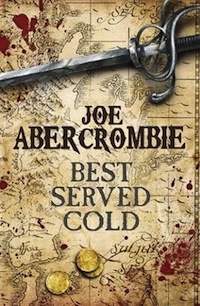 Cover of the UK edition.
"Mercy and cowardice are the same."
— Monzcarro Murcatto
Advertisement:

Best Served Cold is a 2009 Low Fantasy novel by Joe Abercrombie, part of his The First Law series. It's set a few years after events of the main trilogy, and a fair number of characters in it were supporting characters in the trilogy.

As might be imagined, this is a tale of revenge.

In Styria, a land of warring city-states based rather obviously on Renaissance Italy, mercenary captain Monzcarro Murcatto ("Monza") has come close to putting her employer, Duke Orso, on the throne, which would realize his lifelong dream of supremacy. He's a suspicious man, though, and Monza's success has brought her renown; fearing that she may try to convert that into political power, he has her and her brother brutally murdered and thrown off the battlements of his fortress.

Unfortunately for him, he fails to ensure that she's actually dead.

A mysterious stranger finds her broken body and nurses her back to health; suspicious in turn of his motives, Monza escapes as soon as she's able, and swears revenge on all the men present at her "murder"; seven in all, counting Orso, his two sons, his general, Monza's treacherous second-in-command, Orso's bodyguard, and the banker who's Orso's financial backer.

To do this, she assembles a team of oddballs; a warrior Northman failing at becoming a better man, a numbers-obsessed ex-convict, a pompous poisoner and his gluttonous assistant, an ex-torturer, and the alcoholic old mercenary captain that Monza replaced. The task begins easily enough, but Monza soon discovers that going after the powerful has consequences — to her, to her companions, and to the fate of Styria as a whole.

This work provides examples of :