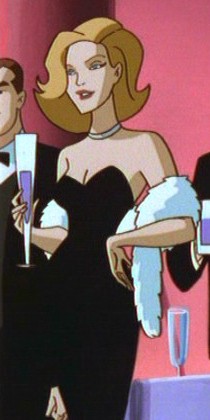 You know this woman. note Technically a socialite can be male, but you rarely hear males of the type referred to with the term. She's cultured and rich, and she knows how to handle any situation (or at least upper-class ones). Her rich husband or father adores her, and never tires of supplying her with a constant stream of Gucci and Armani. She lives in a paradise of a mansion, usually in California, or a penthouse in Manhattan. You might find her hanging out at various social events, with a glass of champagne in her hand. Often she doesn't have a job, but sometimes she can be working in a high-end job, such as that of a celebrity publicist, which nets her a very high salary.

While the Socialite is similar to — and can overlap with — the Rich Bitch, the Gold Digger, and the Upper-Class Twit, there is a difference: a Socialite is often Spoiled Sweet, and she may very well be a nice woman who just so happens to have a lot of money. On the other hand, she can also be Rich in Dollars, Poor in Sense, especially if she's been rich since childhood.

Often she will be either childless or quite distant towards her children.

Can also be prone to Conspicuous Consumption, especially jewels, fancy dresses, and furs.

Distaff counterpart to the Millionaire Playboy. A Sub-Trope of Idle Rich.