The Gloves Come Off 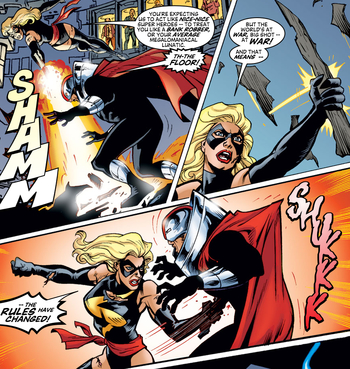 And one of the first things to go is the code against killing.
"That's it. THE GLOVES ARE OFF!"
— Electro (just before blasting Spider-Man through a building), The Spectacular Spider-Man

During a fight, a person can have a lot on their mind. They're trying to defeat their opponent, while avoiding injury themselves. They may be trying to protect Innocent Bystanders, or avoid unnecessary collateral damage. Perhaps they're laboring under self-imposed restrictions or they're just holding back for fun. For whatever reason, they're not giving things their all.

Until the gloves come off.note Or kid gloves, if you feel you've been too nice.

When a character is pushed hard enough, they can reach the point where defeating the enemy in front of them is their one and only goal. Everything else, even their own survival, becomes secondary. The reason for this varies. Perhaps their enemy has sent them into an Unstoppable Rage. Maybe they've realized that they won't be able to defeat their opponent unless they focus on winning to the exclusion of all else, or they've reached the Godzilla Threshold and now they have nothing to lose by going all out. Whatever the cause, the character will cast off anything holding them back, heedless of what it may cost them later.

This is when the character uses their Cover-Blowing Superpower, removes their Power Limiter, or unleashes their Superpowered Evil Side. They may cast off beliefs that were holding them back, or resort to underhanded tactics or repugnant acts they would have shunned before. You can expect to see the Deadly Upgrade and Dangerous Forbidden Technique make appearances. However they accomplish it, part of the gloves coming off involves the character suddenly becoming much more effective in combat.

However, there will be consequences, regardless of who actually wins the fight. They may make a Heroic Sacrifice to take their enemy with them, undergo a Heroic BSoD when they realize My God, What Have I Done?, or suffer from a Heroic RRoD from overstressing their bodies. They may have acted Just Like Their Enemy, or they may become He Who Fights Monsters and be left wondering Was It Really Worth It?. Other heroes, who did not realize the stakes or still thought that they could prevail with the usual way of doing things, may ask "What the Hell, Hero?". On the other hand, the trauma may be just what they need to Earn Their Happy Ending, so it's not always a bad thing.

May be preceded by a "No More Holding Back" Speech. If their enemy can't match their new-found power, it will often result in a No-Holds-Barred Beatdown. If the enemy can match their strength and determination, the fight will probably continue to the point of Combat Breakdown. When the gloves come off, it's usually during a Wham Episode. Not to be confused with literally taking one's gloves off — see The Coats Are Off or Battle Strip for removing clothing before a fight.

No civilians, no problem.

Showing up too late to save the city's entire population from being absorbed by Cell, Piccolo realizes that with the city empty of civilians he no longer needs to worry about accidentally killing anyone besides Cell, and cuts loose.

No civilians, no problem.

Showing up too late to save the city's entire population from being absorbed by Cell, Piccolo realizes that with the city empty of civilians he no longer needs to worry about accidentally killing anyone besides Cell, and cuts loose.