"All very interesting, gentlemen - one man fighting another over the right to repeatedly risk his life attired like a bat..."
— Some random crime boss, Batman #510, summing up the climax of the arc. 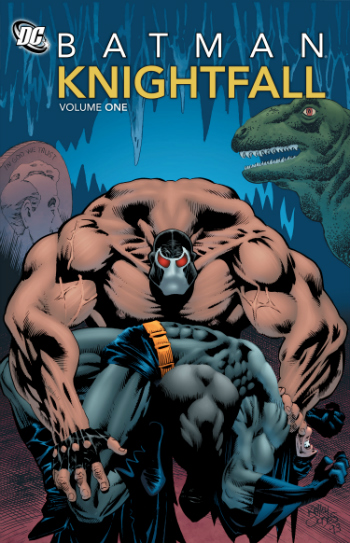 If you thought Supes' death hit you hard, get a load of this.
Advertisement:

Around the time of The Death of Superman, DC started publishing Knightfall, a Bat Family Crossover featured in Detective Comics, Batman, and other related DC titles in the early 1990s. Longtime Batman writer and editor Denny O'Neil, not a fan of the new '90s Anti-Hero trend, planned out a storyline wherein Bruce would face each of his major foes one last time before being crippled and replaced with a Darker and Edgier Batman-For-The-Nineties, before eventually being healed and taking back the cowl. The prelude to the storyline took place from September 1992 to February 1993; this part focused on introducing several new players in Gotham City and showing the mental state of Bruce Wayne. The main storyline took place from April 1993 to August 1994, and follow-up storylines lasted from August 1994 to February 1995.

The storyline truly begins with the introduction of Jean-Paul Valley, a blond haired Übermensch (code-named Azrael) trained to serve as a killing machine by the Sacred Order of Saint Dumas. Batman and Robin tried, with some success, to undo the brainwashing he suffered at the hands of the Order (called "The System"). Jean-Paul stayed on the sidelines during the prelude, but popped in now and again to remind readers he existed.

DC then introduced readers to Bane.note Technically, he'd been introduced in a one shot Batman: Vengeance of Bane, but nobody outside of DC imagined it would be the start of one of Batman's biggest foes. Born and raised in a prison, the super-intelligent Bane underwent experiments to turn him into a nearly-unstoppable Super Soldier. Those experiments worked, but they also made Bane dependent on a drug known as Venom to achieve his full physical potential. After escaping from his "home", Bane makes it his goal to rule Gotham City; to achieve his goal, he must dethrone Gotham's "king" — The Batman.

Shortly after The Death of Superman, Batman loses his edge when he becomes unable to meditate and unwilling to rest. Bane watches from a distance as Batman begins to break down and undermine himself, then ups the ante by interfering a bit more directly (he sends both Killer Croc and a Venom-enhanced Riddler after the hero). His big move — the moment the excrement impacts the rotating device — comes when he busts open Arkham Asylum and gives the escaping inmates enough weapons and supplies to terrorize all of Gotham. An ill and sleep-deprived Batman forces himself to find and take down almost every last escapee.

Batman manages to take down most of his major foes in quick order before they can cause too much damage (some of the more obscure ones don't get captured, and Two-Face doesn't even make an appearance in the first arc, publication-speaking-wise), but doing so takes a huge toll. After The Joker and Scarecrow push him to his limits, Batman returns home to finally rest his weary body. When he arrives, he finds Alfred lying on the floor — and Bane standing over him. Thanks to Batman's exhausted physical state, Bane wipes the floor with Bruce in a mostly-one-sided fight that ends when Batman is lifted into the air by Bane, who then uses his knee and a healthy dose of downward momentum to break Batman's spine.

Bruce lives through the attack, but he can no longer assume the role of Batman. He tells Jean-Paul to assume the role of The Batman — Gotham still needs its protector, after all — but also tells him to avoid a direct confrontation with Bane. Az-Bats does a serviceable job as Batman (even though he tries to keep Robin sidelined), but exposure to Scarecrow's fear toxin causes "The System" to kick in and "protect" Jean-Paul. He begins to lose control of his violent inhibitions, which makes him more brutal in his confrontations with criminals. He also re-designs the Batsuit, first by adding clawed mechanical gloves armed with mini-batarangs. He later bemoans his inability to fly and lack of protection against projectiles after a fight with Bane, which further re-designs help fix.

Commissioner Gordon becomes suspicious of Az-Bats (who he doesn't know has replaced the real Batman) when he fails to, well, pull a Batman on him after they talk. His suspicions increase when the newly-armored Batman fights Bane once again, seemingly with the intent to kill him. Gordon stands ready to order his men to fire upon the "fake" Batman, but when Az-Bats spares Bane's life, Gordon spares his.

Between Az-Bats losing his grip and the general Fan Backlash against Az-Bats, a healed Bruce Wayne eventually takes back the cape and cowl — forcibly, of course, and mostly by outsmarting his mentally unstable protege.

For a long time, rumours competed over whether DC/O'Neil had planned the whole thing from the start as a way of sticking it to readers clamouring for a Darker and Edgier Batman, or had seriously intended to replace Bruce Wayne as Batman.* Comic Book Legends Revealed even debunked the rumour that it was a ploy to stop paying Bob Kane royalties - incidentally, even if it had been, that wouldn't work, as long as they published a book called "Batman", regardless of the character's identity Since then, many of the series' writers have been upfront about the fact that Az-Bats' rise and subsequent fall had indeed been planned from the start, at least in part as a Take That, Audience! towards the "Batman should be like The Punisher!" Misaimed Fandom. In retrospect, it's rather obvious, particularly when they introduced Shondra Kinsolving and her healing powers fully months before the start of the crossover.

The story received a Spiritual Successor in Tom King's Batman (Tom King) titled "I am Bane".

See also Batman Doom, a Doom Game Mod loosely based on the Knightfall plot arc, and The Dark Knight Rises, which lifts many plot elements from this storyline.