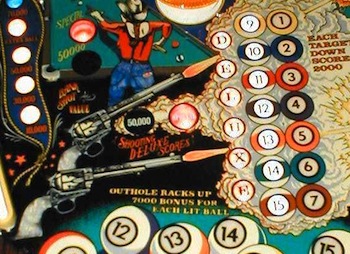 Isn't this what you meant by "shooting" pool?
"This is the greatest hand gun ever made: The Colt Single Action Army. Six bullets. More than enough to kill anything that moves."
— Revolver Ocelot, Metal Gear Solid
Advertisement:

Views are mixed when it comes to guns. However, there is one gun that we can all agree is cool: the revolver.

Let's face it, revolvers are cool. In fiction, revolvers are often shown to be better than any other handgun. In video games, they may be the most accurate, most powerful, and rarest of all handguns. If a character is The Gunslinger, chances are it's a revolver he'll be slingin'.

In Westerns, cowboys and outlaws are seen with revolvers. But this is because revolvers were the only repeating handguns at that time in history, not because of any cool factor. That doesn't stop it from being cool, though. One could argue this is where revolvers first picked up their mystique, though Dirty Harry is probably responsible for popularising Magnum-loaded revolvers as the Hand Cannon of choice; this has faded a little in recent years, with the first choice for movie hero personal artillery more likely to be a .50AE Desert Eagle, much to the annoyance of gun enthusiasts. An enduring legacy of Dirty Harry is that it's often assumed that every powerful revolver is a Magnum.note "Magnum" does not mean "really powerful;" it refers to a longer (and yes, inherently more powerful) cartridge version of an existing caliber. The .454 Casull, for example, was the most powerful revolver available to civilians for many years, yet doesn't even have "Magnum" in its name (despite still technically being one to the .45 Long Colt and .45 S&W calibers). An easy demonstration is that while the revolver is the Hand Cannon to a regular semi-auto pistol in most media productions, one shouldn't expect to see a semi-auto pistol as the Hand Cannon to a regular revolver. This is particularly evident in videogames, where the revolver will always outclass a semi-auto shot-for-shot: after all, if the revolver didn't have that advantage, then it would be totally useless.

For a more detailed look at the advantages and disadvantages, see the analysis page.

For a competing product, see the shotgun (particularly the Sawed-Off Shotgun) or the katana. Tends to be a Punch-Packing Pistol or a Sniper Pistol when not a Hand Cannon outright. Compare and/or contrast with Revolvers Are for Amateurs, where they're just better for someone inexperienced.

The Rabid Heavy Taming Engineer doesn't need any fancy rifles or shotguns to deal with his adversaries on BLU Team.

The Rabid Heavy Taming Engineer doesn't need any fancy rifles or shotguns to deal with his adversaries on BLU Team.