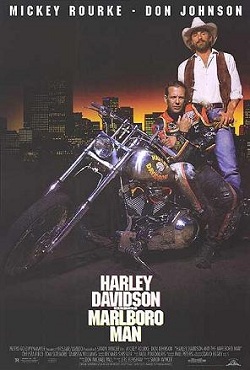 So much macho, it might make you sick.
Advertisement:

Harley Davidson and the Marlboro Man is a 1991 action film, starring Mickey Rourke and Don Johnson. The film was written by Don Michael Paul and directed by Simon Wincer.

Set in the then-future of 1996, Harley Davidson meets a life long friend, a cowboy who is nicknamed The Marlboro Man and they later plan a bank robbery to help save their friend's bar from being foreclosed and replaced with a skyscraper. However, after they rob a bank's armored car, they discover the cargo they stole is the designer drug Crystal Dream, not money. Chance Wilder, who is a bank president involved in drug dealing, demands the return of the drugs. A series of increasingly deadly encounters ensue as heavily-armed assassins hunt for Harley and Marlboro, and the film continues to detail their attempts to escape with their lives.