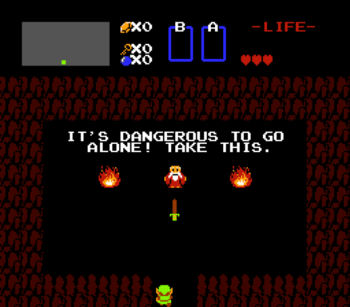 In many RPGs, The Hero's quest is a long one fraught with danger. So naturally whatever you're doing, you'll want the best equipment available at any given moment, and so most games will deliver. Your average RPG hero (and their party) will come to wield axes of stone, swing Flaming Swords, carry staffs that allow them to summon the very gods, draw bows crafted by reclusive masters in their field and deck themselves in the hides of legendary beasts and metals dug from far beneath the earth or beyond the stars.

...but you still need to start somewhere. Enter this trope; the default equipment from the start of the game.

Generally speaking there's a few things you can expect from this default equipment;

Characters that join later in the game don't count since they always have generic equipment for that level (or even better equipment if you're lucky). Sometimes, at the beginning of the game, you'll be given something better to use before this trope catches up with you. Keep in mind that items that aren't upgraded or replaced as the game goes on and just serve to introduce game mechanics are not this trope, since they only act as an in universe explanation for that ability (so healing items which you'll be able to buy better versions of count, as do equipable items, but a PDA you're given that serves as your pause menu or a pair of gloves that enable Video Game Stealing but are never replaced or upgraded does not).

Compare Emergency Weapon for an early piece of equipment that has some slight advantage (typically being unbreakable or never running out of ammo) to make it a backup rather than just a springboard to later weapons and the equally useless stuff that's Better Off Sold. If the hero starts out on an important quest but still gets no help with getting better equipment then this is With This Herring. Using it may be the aim of a Self-Imposed Challenge. This can overlap with Weapon Jr..

In most Real-Time Strategy games with a campaign mode, the first mission features one or two basic types of troops and may not even feature your Worker Unit. In Mons games, the equivalent is the Starter Mon.