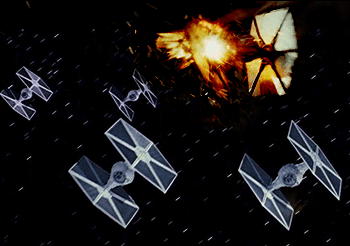 In contrast to the Ace Custom and Super Prototype, the Mook Mobile is the standard craft designated for Mooks and Red Shirts to drive around and get blown up in. May be equipped with basic armaments and little in terms of protection. The hero or heroes may talk them up for dramatic purposes, but when engaged in actual combat, the Mook Mobiles die like flies. People may wonder if they're made out of cardboard and intentionally designed to kill the occupant inside without damage to the hero. But at least they're cheap to make!

Will usually be the opposite of a Cool Ship. When one these puts up a decent performance, it's probably because someone with actually decent piloting skill is behind the wheel, or perhaps the Inverse Ninja Law is in effect.