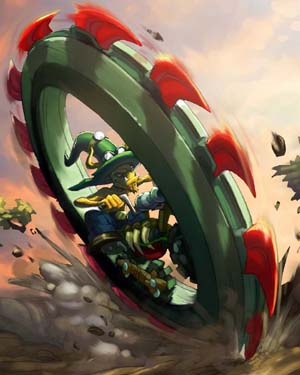 I don't think your insurance will cover what that thing did to your neighborhood.
Advertisement:

So you've decided for your character's Cool Car to be a motorcycle. But aren't hogs overdone by Hells Angel lookalikes and feeling that the Japanese bikes are too generic? Then lucky for you there exists a type of motorbike called the Monowheel

that is essentially a motorcycle IN A GIANT WHEEL.

This type of vehicle is typically used in futuristic or fantasy settings despite it having pedal versions in the late 19th century.

The issue of fast acceleration and sudden braking leaving the rider spinning inside the wheel itself is usually ignored or handwaved.

A Sub-Trope of One-Wheeled Wonder. Compare Rolling Attack, which describes a living (or robotic) being temporarily adopting a similarly rolling form for aggressive purposes.

General Grievous attempts to escape from Obi-Wan with a wheel cycle, as the latter gives chase.

General Grievous attempts to escape from Obi-Wan with a wheel cycle, as the latter gives chase.