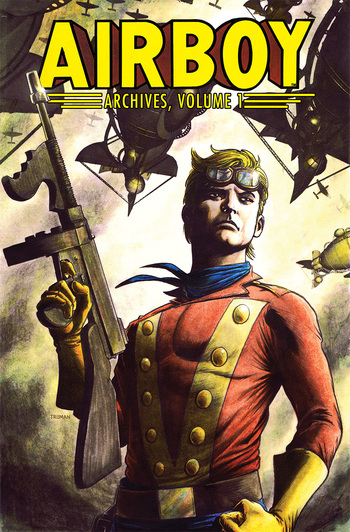 Airboy was Davey Nelson Jr, a Golden Age comic book character that originally appeared in Air Fighters Comics #1 (Volume 2). He proved to be so popular that Air Fighters Comics was eventually renamed Airboy Comics. The original comic ended in 1953, when Hillman Periodicals left the comic publishing business. All the characters that appeared eventually lapsed into public domain, allowing Eclipse Comics to revive them in the early 1980s. Chuck Dixon handled the writing and Tim Truman handled the initial art. The revival is notable for trying to bring some measure of realism into the story while still honoring the original continuity.

When Eclipse Comics went out of business, Todd McFarlane wound up getting the company's assets. Although he announced his intention to revive Airboy and other Air Fighters characters, it didn't pan out. Since the original characters were still in public domain, Chuck Dixon decided to try to revive them. He originally intended to publish it through Shooting Star Comics, but when the company folded, he wound up taking his pitch to Moonstone Books. The company published Dixon's original story and proceeded to revive the other characters on the pages of revived Air Fighters title.

The original Airboy was a young pilot who flew Birdie — an occasionally plane that flapped its wings like a bird. He used his plane to fight the Axis forces and various supernatural menaces. When the World War II ended, he shifted to more super-villains and air-related criminals. The Eclipse revival starred David Nelson III, the original Airboy's son. The new series (simply called Airboy) was a continuation of the original Golden Age stories, except it tried to take a more realistic approach to airplanes and flight, even as it kept some of the odder aspects of the original stories. The Eclipse series featured many characters that originally appeared in Air Fighters Comics as supporting characters. Most notably, it featured Valkyrie, the original Airboy's memorable but rarely seen love interest, became part of the main cast.

The Moonstone revival returned to the World War II era and revamped most of the Air Fighters characters from scratch (while throwing Captain Midnight into the mix). The Moonstone version of Airboy appeared in comics and prose anthologies. At this point, it's hard to say how this version will compare to the preceding versions.

Image Comics published an Airboy miniseries written by James Robinson and drawn by Greg Hinckle. It's a semi-autobiographical meta story focusing on Robinson and Hinckle as the main characters alongside Airboy, who somehow ends up in the real world. The series is also focusing on a fictional interpretation of the low points in Robinson's later career, such as his last few critically lambasted works for DC Comics and his alcoholism. This is a very adult take on the character and concept, and also very NSFW.