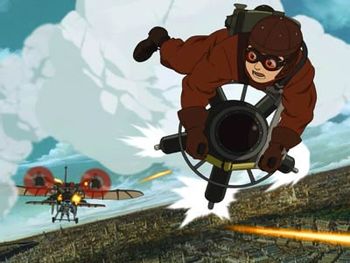 Young James Ray Steam is a maintenance boy in a Manchester mill and a Steampunk inventor in his own right. When his grandfather sends him a steam-producing ball, he is kidnapped by the O'Hara Foundation and taken to his cyborg father on the Steam Castle. The Castle seems innocuous, but it proves to be a huge weapons station, and a battle between the Foundation and the British army ensues.

Created and directed by Katsuhiro Otomo, Steamboy held the distinction of being the highest-budget anime movie ever made up until the release of The Tale of the Princess Kaguya in 2013, and it shows in the beautiful animation and machine designs. As of 2020, this is the only major anime directed by Otomo outside of AKIRA.