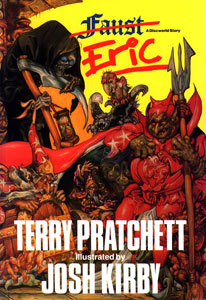 A Digital Devil Story.
Eric is the Discworld's only demonology hacker. Pity he's not very good at it. All he wants is three wishes granted. Nothing fancy - to be immortal, rule the world, have the most beautiful woman in the world fall madly in love with him, the usual stuff. But instead of a tractable demon, he calls up Rincewind, probably the most incompetent wizard in the universe, and the extremely intractable and hostile form of travel accessory known as the Luggage. With them on his side, Eric's in for a ride through space and time that is bound to make him wish (quite fervently) again - this time that he'd never been born.
Advertisement:

Sometimes counted as the ninth Discworld novel, although this is where numbering gets tricky as some prefer to count Faust Eric as a special. It's shorter than most Discworld novels, was published by a different publisher, and was originally intended to be an illustrated work. The title is officially simply Eric, but on most covers it is preceded by the struck-through title Faust, a reference to how the title character is a parody of Doctor Faustus.

Rincewind was trapped in the Dungeon Dimensions at the end of Sourcery, but is now summoned back to the Disc by Eric, a young demonologist who was trying to summon a demon with a similar name. (For much of the book he's convinced Rincewind is a demon.) The story follows the two of them as they inadvertently travel through space and time to grant Eric's Three Wishes.

Meanwhile, the King of Hell, the demon Astfgl, is trying to find them, but is always one step behind. His subordinates are mutinous thanks to his attempts to instil modern business practices in Hell—prior to his rule, the damned souls had worked out that pain was purely subjective and thus all the whippings and flayings were purely for the look of the thing, but Astfgl instituted project planning, health and safety and so on and now Hell torments both the damned and its own demons.

This was the last Discworld novel to feature Rincewind (a character whom Terry Pratchett wasn't all that fond of writing, though the fans like him) until the retrospective Interesting Times. It is also the last to feature the early conception of Unseen University, with the staff changing with each book thanks to the wizards' practice of Klingon Promotion.

Preceded by Guards! Guards!, followed by Moving Pictures. Preceded in the Rincewind series by Sourcery, followed by Interesting Times.