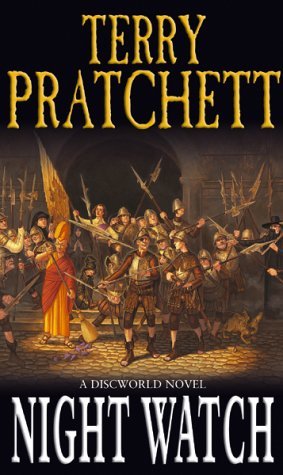 A Discworld tale of intrigue, rebels, street urchins, assassins, torturers and time monks. May or may not have anything related to this picture.
"He wanted to go home. He wanted it so much that he trembled at the thought. But if the price of that was selling good men to the night, if the price was filling those graves, if the price was not fighting with every trick he knew... Then it was too high. History finds a way? Well, it would have to come up with something good, because it was up against Sam Vimes now."
Advertisement:

The 27th Discworld novel and the sixth in the Watch theme. The framing events take place at the same time (such as it is) as the previous novel Thief of Time and also set up events for the following novel Monstrous Regiment. The Watch is on the hunt for a serial killer named Carcer, who has murdered Sergeant Stronginthearm. Vimes has him trapped on the University Library's roof, but when a lightning boltnote  the same time altering one from Thief of Time strikes, it causes a freak magical incident that catapults Vimes and Carcer thirty years back in time. Vimes soon inadvertently steps into the shoes of his old mentor, John Keelnote named for the writer and researcher of The Mothman Prophecies and lands himself right in the middle of the Ankh-Morpork civil war. Now he has to stop Carcer, fill his mentor's role in his younger self's life, and protect the citizens of Ankh-Morpork and his fellow Watchmen from the impending war. Except that if he succeeds, he will no longer be able to return to his timeline. Basically Life On Mars meets Les Misérables.

This novel is hailed by both fans and critics as one of the best installments of the series despite, or maybe because of, its much darker than usual tone, with fewer obvious jokes (though there's still plenty) and a more serious story than previous installments.

Should not be confused with the Night Watch (Series) of books by Sergei Lukyanenko, or the film adaptation, or that one. The front cover art by Paul Kidby is an homage to Rembrandt's famous 1642 painting The Shooting Company of Frans Banning Cocq which also commonly referred as The Night Watch, a reproduction of which adorns the back cover in the Hardcover edition. This is the first cover by Kidby who took over the role of cover artist after the death of Josh Kirby.

Preceded by Thief of Time, followed by Monstrous Regiment. Preceded in the Watch series by The Fifth Elephant, followed by Thud!.