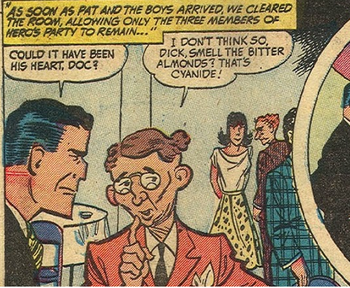 "The cheerleader waves her cyanide wand
There's a smell of peach blossom and bitter almond..."
— Genesis, "Broadway Melody of 1974".

Occasionally in Crime and Punishment stories, a person who has died suddenly and unexpectedly will have been the victim of cyanide poisoning.

The first, best, and only symptom of cyanide poisoning in television is that it leaves the smell of bitter almonds

In the real world, while most people can smell cyanide (about one in four are genetically predisposed not to), hydrogen cyanide is often undetectable until 600 PPB, a rather high and dangerous concentration. Also, bitter almonds being uncommon and smelling very different from regular (sweet) almonds, most people would not know what they smelled like anyway. But in the television world, everyone can identify cyanide by smell.

One interesting thing about this trope is that it is self-reinforcing; the trope itself has raised public awareness such that it is increasingly likely that even a layperson would recognize the significance of the smell if he or she was physically able to detect it. (However, many laypeople, if not most, don't understand the difference between bitter and sweet almonds.)

Bitter almonds smell like cyanide because they contain cyanide, but sweet almonds smell primarily of benzaldehyde, which most people associate with the aroma of cherries... almond and cherry flavoring extracts rather famously smell nearly identical (mainly because almond is actually a close relative of cherries, peaches and apricots). All these aromas are mainly caused by a glicoside called amygdalin (from the Greek "Amygdalon", "almond"), which in broken seeds of the prune family fruits, including the almonds is enzymatically dissociated to the aforementioned benzaldehyde and hydrogen cyanide — whose smells are, curiously, quite similar.

If it's clear that a character who should know better confuses the smell of cyanide or bitter almonds with the smell of sweet almonds, almond extract, or "burnt almonds", then the writer hasn't bothered to fact check. It's also oddly uncommon for fictional characters to identify the smell as being associated with arsenic.

Not related to sour grapes. Related to Smells of Death.