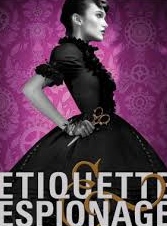 Sophronia Temminnick in all her intelligencer glory.
Advertisement:

The Finishing School series is set in the same world as The Parasol Protectorate, only 25 years earlier, and features a finishing academy located in a giant caterpillar-like dirigible floating over Dartmoor in which young ladies are taught to ... finish everything and everyone, as needed. There is steampunk etiquette! There is well-dressed espionage! There is Victorian fake food! There is a mechanical sausage dog named Bumbersnoot! The first book, Etiquette & Espionage, released Feb 5, 2013, was an instant New York Times Bestseller.

The series concerns an unconventional young girl, Sophronia Temminnick, who is sent to a finishing school by her mother after an incident at home. At first despondent, Sophronia changes her mind when she realizes that they do not just teach manners at Mademoiselle Geraldine's, but espionage. Quite delighted, she stays on and embarks on many adventures.