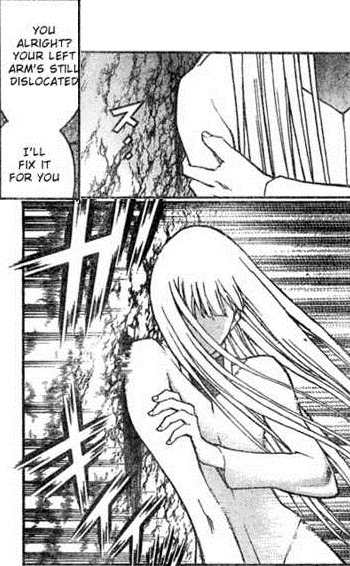 A dislocated joint, usually a shoulder, is a fabulous dramatic device. It's (usually) non-lethal, it hurts a lot, it severely disables their range of motion, and the character is usually forced to reduce (relocate) the joint without the convenience of proper medical attention or anesthetics, meaning it will almost always hurt. A lot.

The injured person will often have to coax someone nearby into assisting with the reduction, which they will be reluctant to do because of the Squickiness of the procedure. The opposite of this is when the injured person is assisted by a more experienced individual who lulls them into a more relaxed frame of mind before surprising them by deftly snapping the joint back into place. If you want to show someone as a total badass, have them relocate their own shoulder by slamming it into a wall, etc.

This trope has some elements of Truth in Television; while it is always better to seek proper medical attention, people in remote locations such as hikers and skiers sometimes have to reduce dislocated joints on their own. Where this trope starts to break from reality is the method used to pop the bone back into place. There are procedures that, while not as quick and dramatic as those shown in media, can put a shoulder back into joint with minimal pain, and most people with experience dealing with injuries would know this.

After his hard fought battle with Godzilla, Kong takes use of a respite to put his shoulder in place. By bashing it against a building.

After his hard fought battle with Godzilla, Kong takes use of a respite to put his shoulder in place. By bashing it against a building.