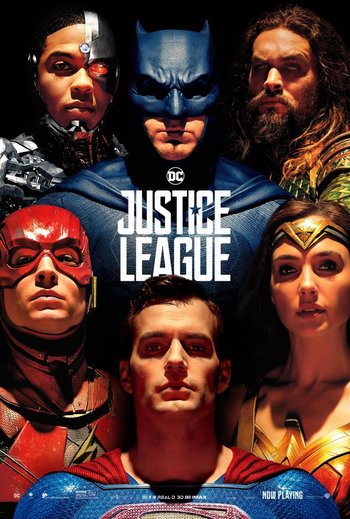 You can't save the world alone.note  Clockwise from top center: Batman, Aquaman, Wonder Woman, Superman, the Flash, and Cyborg.
Diana Prince: They said the age of heroes would never come again.
Bruce Wayne: It has to...
Advertisement:

Justice League is a superhero film and an adaptation of Justice League of America, the iconic DC Comics Super Team. The film was initially directed by Zack Snyder, then additional post-production material was written and directed by Joss Whedon following Snyder's departure from the project.note Despite this, Snyder retains sole directorial credit for the finished film. It is the fifth film set in the DC Extended Universe, released on November 17, 2017.

With a restored faith in humanity following the events of Batman v Superman: Dawn of Justice, Bruce Wayne/Batman (Ben Affleck) joins forces with Diana Prince/Wonder Woman (Gal Gadot) and recruits three other superpowered metahumans, Arthur Curry/the Aquaman (Jason Momoa), Barry Allen/the Flash (Ezra Miller), and Victor Stone/Cyborg (Ray Fisher) to form an alliance to protect the Earth from a powerful enemy, the New God Steppenwolf (Ciarán Hinds), and his army of Parademons. But to even stand a chance against a threat from beyond the stars, there is still the matter of the return of Clark Kent/Superman (Henry Cavill) after his seeming demise.

with original footage (released while the movie was still filming) was premiered at the 2016 San Diego Comic Con. A sizzle reel

was released following the film wrapping principal photography. The first official trailer can be seen here

, the 2017 San Diego Comic Con trailer can be seen here

and the final trailer is here

The film had a notoriously troubled production. Zack Snyder stepped down during post-production after a family tragedy and Joss Whedon was tasked to deliver the theatrical version on a studio mandate. Whedon oversaw rewrites to the script and shot new scenes meant to give the movie a lighter tone and more humor in an attempt to course-correct from the criticism that Batman v Superman got for its somber tone, all the while scrapping a lot of footage and even entire scenes filmed by Snyder and written by Chris Terrio. Audiences immediately saw the changes from what was shown in trailers (a number of which are detailed on the Trivia page) and from the overall tone heavily clashing with Snyder's previous films. A fan campaign emerged to have the "Snyder Cut" released, spurring debates for over two years on how different this version would be, how complete it was and if it could ever see the light of day.

This campaign ended up succeeding. In late 2019-early 2020, WarnerMedia approved a budget for Snyder to develop a proper Director's Cut, which was eventually released as Zack Snyder's Justice League on HBO Max and home video in 2021. This new film is distinct enough in storytelling, style, tone, length and footage to have a separate trope page.

open/close all folders
Tropes # to D
Tropes E to J
Tropes L to R
Trope S to Z
"But these heroes were here the whole time to remind us that hope is real. That you can see it. All you have to do is look up in the sky..."
Feedback