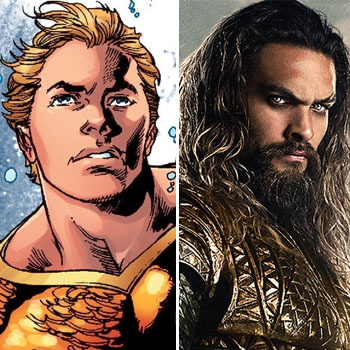 Left: Aquaman in the comics.
Right: Aquaman in the DC Extended Universe.
In an adaptation of any work, be it a TV series, a novel, or even a remake of another film, there are bound to be some changes made. Sometimes Age Lift is used, making a child character older, or an elderly character younger. Adaptation Distillation removes elements, and Pragmatic Adaptation changes the story altogether to fit the new medium.
Advertisement:

This trope is one that more often than not is not intentional. This is the case where a character's general hairstyle is changed from one adaptation of the character to another.

You'll most likely find this trope pertaining to female characters, as Long Hair Is Feminine, and long hair is much more prone to change than the relatively uniform short hairstyles given to the majority of male characters. If they're doing a live-action adaptation they might also change the hair from practicality as some hairstyles are difficult or outright impossible to recreate in real life. This could also happen with animated adaptations, as limitations in animation technology (especially with CGI) could also play a factor.

Super-Trope to Adaptational Dye-Job, where the primary thing changed about a character is the color of their hair.

This trope is almost guaranteed to occur if a character receives a Race Lift or a Gender Flip. Often the result of Real Life Writes the Hairstyle, which can cause adaptations of characters to receive different hairstyles that either wouldn't be practical for actors in live-action, or difficult to animate in animation.

Examples (sorted by the medium of the adaptation)