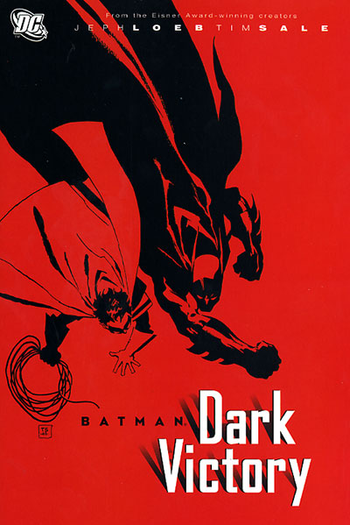 Batman: Dark Victory is a 13-part comic book series written by Jeph Loeb and drawn by Tim Sale. The series is a sequel to Batman: The Long Halloween and was originally published from 1999 to 2000 by DC Comics. The series takes place primarily during the third/fourth year of Batman's career. The plot centers on a series of murders involving Gotham City police officers by a mysterious serial killer only known as The Hangman. Central to the storyline is a territory war between Two-Face and the remnants of the Falcone mob, led by Sofia Falcone. The story brings closure to many characters introduced in Frank Miller's Batman: Year One, and also re-tells of the origins of Dick Grayson, the first Robin, and his adoption by Bruce Wayne.

Christian Bale, who played Batman for The Dark Knight Trilogy, cites this series as his favorite Batman story.

In 2004, Loeb and Sale produced a follow-up titled Catwoman: When in Rome, focusing on Catwoman's movements in Italy. The story takes place during the events of Dark Victory, between Valentine's Day (when Catwoman leaves Gotham) and Thanksgiving.

Not to be confused with the 1939 film Dark Victory starring Bette Davis.