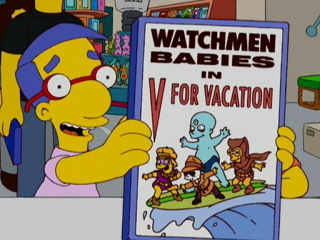 This is why Alan Moore doesn't want us to have nice things.
"What are you trying to feed the child — sanitized pablum? Li'l Death? Li'l Morpheus? Revolting!"
— Cain, The Sandman

Cartoons have a tendency to get spun off into new shows with younger versions of the original characters. No one is quite sure why producers do this, aside from the opportunity to make a new franchise for a new demographic out of an older, successful property. Often the concept of the original show is dropped entirely and replaced, but sometimes it's adapted to an elementary- or middle-school setting. Frequently parodied, due to the absurdity of some of the examples.

If any of the voice cast of the original series is still alive, expect them to have occasional-to-recurring guest roles as the parents of the younger versions of their original roles (e.g. Henry Corden, the regular voice of adult Fred Flintstone at the time, was the voice of young Freddie's dadnote and mom on The Flintstone Kids). Related to Recycled In Space and High School A.U.. This is not about spin-off shows where characters have kid-like proportions as they are still otherwise treated like adults despite being lighter in nature. The main draw of this spin-off is that they are younger, with sensibilities aimed at them being of a young age.

Contrast Time Skip, which tends to make the characters older instead. Compare Young Future Famous People, which does this with real people. If the characters start displaying hints of their main-series personalities, see Early Personality Signs.