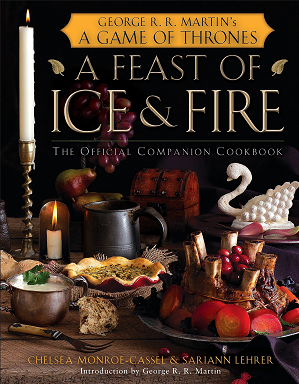 It was either that or write a novelty cookbook.
—The Doctor, Big Finish Doctor Who audio The Kingmaker
Advertisement:

If you have a popular franchise, you probably have novels and action figures and DVDs and so on. What else will people buy?

Sometimes the cookery book is officially released, or it can be fan-made.

There is also a subset of Parody cookbooks with funny parallel Pun Based Titles. These are both loving and mocking in tone. They make fun both of the original work and cookbooks in general. The recipe names will most likely be punning, too.