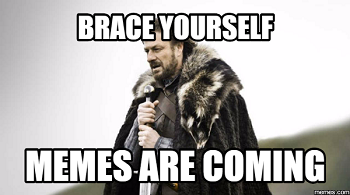 The phenomenal success of HBO's Game of Thrones in this day and age made it extremely meme-tastic.

Beware, this page is dark and full of unmarked spoilers.

3 — What Is Dead May Never Die

7 — The Bear and the Maiden Fair

9 — The Rains of Castamere

8 — The Mountain and the Viper

9 — The Watchers on the Wall

9 — The Dance of Dragons

9 — Battle of the Bastards

7 — The Dragon and the Wolf

2 — A Knight of the Seven Kingdoms