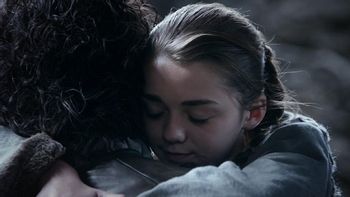 "Stick 'em with the pointy end."
"There is only one God, and His name is Death. And there is only one thing we say to Death—not today."
—Syrio Forel, the First Sword of Braavos
Advertisement:
open/close all folders

1 - The Wars to Come
2 - The House of Black and White
3 - High Sparrow
4 - The Sons of the Harpy
One of his Kingsguard knights tells Tommen that if he gives the word they will "clear out this rabble." Tommen actually has to ask him if he means "kill them." When it looks like it's going to explode into a huge fight (which Tommen's side will likely lose, since they are surrounded and outnumbered), Tommen wisely backs down and returns to Margaery, telling her there was no way to get Loras back without resorting to violence. It seems Tywin was correct when he said that Tommen has the right temperament for a king, even if he does not truly have the power, authority, or birthright.