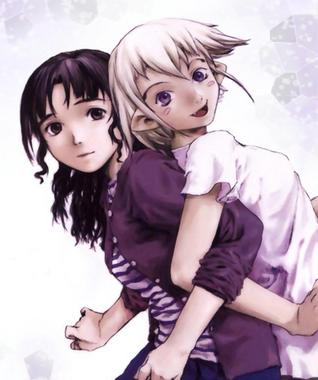 The aliens have landed! But that was many years ago, and no one really cares any more. All the fuss and excitement over the arriving UFOs has, for the most part, settled down, and people have returned to everyday life. Aliens, too, are gradually integrating into normal human society. Our story follows one Mayuko Chigasaki, a hard working, self supporting cram school student, who also works multiple part time jobs simply to pay for school and feed herself. Niea is the lazy, selfish, freeloading alien who lives in her cupboard, eats all her food, and generally drives her nuts.

Niea_7 is an anime series created by Yoshitoshi ABe note intentional capitalization, produced with the same team that worked on Serial Experiments Lain. Despite being a typical Yoshitoshi ABe product, it is ostensibly a comedy series. It holds much more interest as a Slice of Life series following everyday life in the sleepy district of Enohana, tracking Mayuko's struggles to come to terms with herself and the world around her.