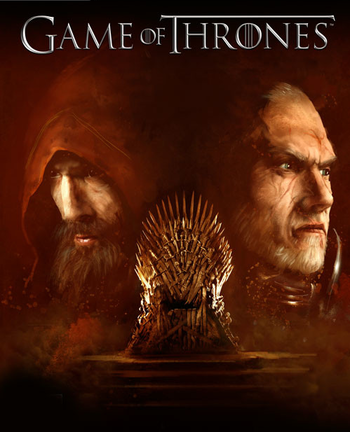 "There is nothing so terrifying as a truly just man."
— Varys, A Song of Ice and Fire
Advertisement:

Game of Thrones is a 2012 Action RPG inspired by George R. R. Martin's fantasy epic A Song of Ice and Fire, but not, ironically, by the television show of the same name. The game was in Development Hell for seven years, and it is very clear that the plot draws far more from the book than the show.

Throughout the story, the player takes control of two disgraced knights. One, a Sworn Brother of the Night's Watch named Mors Westford, otherwise known as the Butcher. The other, Alester Sarwyck, a Red Priest returning home to reclaim his inheritance. Both are immediately introduced as Well-Intentioned Extremists, with the player often having a say as to how either character reacts to brutal life in the Seven Kingdoms. Their stories are kept separate for much of the game, with Mors in the North and Alester in the South. Both characters will face many forms of corruption and betrayal, and over the course of the game, the player will be confronted with the same harsh realities and shocking twists the series is known for. And of course, everyone dies.

It is worth mentioning that though the game draws on plot points ignored in the television show, it actually features the voice work of James Cosmo (Lord Commander Jeor Mormont) and Conleth Hill (Lord Varys) as their respective characters from the show. Other major characters appearing with unique portrayals are Queen Cersei Lannister, Qhorin Halfhand, and Chataya. For tropes regarding book characters, please see their respective pages.

The game was developed by Cyanide Studio, and released on PC, Playstation 3 and Xbox 360. Note: If you're looking for the Telltale Games game of the same name, go here.