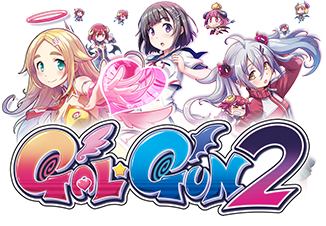 Gal*Gun is a Rail Shooter series developed by Inti Creates. The premise is different from most other rail shooters out there — instead of shooting zombies or enemy troops with guns, here you have to stop a mob of lovestruck girls with a Pheromone Shot. It's something so utterly insane that only the Japanese could have created it.

Gal Gun 2 changes things up, as this time the protagonist was randomly selected to become a demon-fighting hero and given equipment that lets him see and fight them. And also makes him irresistible to girls. Instead of having one day to find his true love, the protagonist has 20 days to rack up enough Demon Buster points to help an angel meet her monthly quota. Missions are divided up into Main, Side, and Free missions — main being about the main story, side being interactions with important female characters, and free missions being given out by the various other female characters. Two missions can be performed each day.

The series was originally a No Export for You in Japan, but thanks to Ekoro's unexpected popularity as a playable character in Mighty Gunvolt, Gal*Gun made the jump overseas with its first international game, Gal*Gun Double Peace. A VR spinoff title was also released for PCs known as Gal*Gun VR, whose style and mechanics would later become the basis for the third main series title, Gal*Gun 2 for the Nintendo Switch and Playstation 4.

Has a character page here that Needs Wiki Magic Love.

The Gal*Gun games provide examples of: