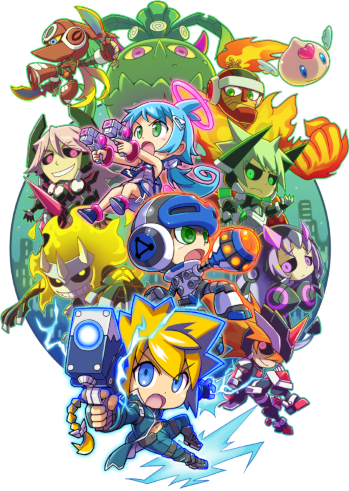 Initially created as a side game for Azure Striker Gunvolt for the Nintendo 3DS, the first game’s story primarily focused on facing off against the Sumeragi agents Mega Man-style. The game can be completed in five levels, though Inti created more to play through as DLC which became implemented in the PC, PlayStation 4, and Vita releases. Like its titles would imply, this mini throwback brought together the protagonists of the past three games Inti Creates worked on at the time: Azure Striker Gunvolt’s Gunvolt, Mighty No. 9’s Beck, and Ekoro from Gal*Gun: Double Peace.

Three years later, and a sequel, Mighty Gunvolt Burst, would be playable as its own standalone title. This installment decidedly went the “Mighty” route; taking place after the events of Mighty No. 9, the game starts off as Beck finishes training inside Professor White's simulation program only to find himself unable to leave the program, but eventually crosses path with a mysterious entity that resembles Gunvolt who claims to be the program's “Game Master”, challenging Beck to a duel against him and his septimal powers. Similarly, while on a mission one day, Gunvolt finds himself suddenly pulled into the training simulation when a strange glimmer of light from his universe appeared, and later runs into a mysterious robot boy claiming to be Beck who challenges Gunvolt to a tournament versus him and his Mighty Number family. With seemingly no way out, it's up to them to venture through the simulation and put an end to whoever is trapping them inside the virtual world.

The game also features various other characters from Inti Creates' other titles as downloadable content, each with their own storyline. While Ekoro was initially absent from the game, she was released as the first DLC character (even being made a save bonus if you downloaded the demo), though she isn’t as important to the plot as she was the first go-around; she later got more spotlight along with Beck and Gunvolt in the PlayStation 4 version and was bundled in that version for free. Joule and Call were the next two to be added, followed by a “Rival Pack” of Copen, RAY, and Kurona to round out the playable roster. The last character added was Tenzou from the first Gal*Gun, who ended up packaged with Joule and Call for the PlayStation 4 version's "Heroine Pack".

Mighty Gunvolt Burst was released on June 15, 2017 for the Nintendo Switch, followed by a 3DS version two weeks afterwards; a PlayStation 4 version, re-using the Gal*Gunvolt title, was released on March 15, 2018. A PC version of the game was announced during Anime Expo 2019 and was released on July 31st, 2019 through Steam along with every DLC character available for purchase.