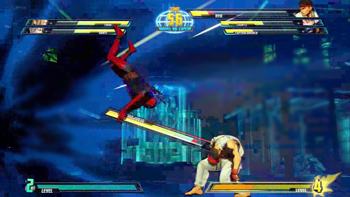 "HEALTH BAR IN YOUR FACE!"
Advertisement:

There are certain things we're used to seeing in certain media: speech bubbles, captions, and frames in comics, wires that make people "fly" in shows, status bars and inventories in video games, and stage hands that move props and sets around in theater.

A character who has Medium Awareness also knows about those things. This trope is when they interact with some part of the setting that is conventionally treated as "not really there" or when a part of the setting stops being just a prop and suddenly acts on its own.

Stage hands is where the trope gets its name. The classic outfit associated with Ninja (black, tight suit and a mask with a slit for the eyes) actually comes from stage hands in Japanese theater. They wore black so that the audience knew to ignore them. (The variety of stagehand in live performing arts who handle props and setpieces on, off, and around the stage in Western theatre are colloquially referred to as "stage ninjas" due to their all-black clothing and stealthy profession, so the term has fed back into itself.) Imagine the shock of the audience, then, when the non-entity setting the castle walls in place for scene 4 suddenly pulls out a dagger and kills one of the characters.

Characters with Medium Awareness may do this intentionally as a means of Exploiting the Fourth Wall.

Perception Filter may be an in-universe related trope. A subtrope of Metafictional Device. In video games, Interface Screw may qualify as a Ninja Prop, especially when the game simulates effects from external sources/other programs. In Comics, Frame Break is the most common form of this trope. A Harsh Word Impact may also be this.

Compare Diegetic Visual Effects, when the metafictional "prop" or effect is not actually metafictional at all, but an actual part of the in-universe setting that everyone can see and interact with (not just the Medium Awareness character).

The Butler Did It is broadly similar. It was a shocking twist because he would be there serving the characters the whole time without being one of them; his being part of the story is like discovering that the table was the murderer.

Coconut exploits the Ninja Prop trope to Team 1's advantage when Album is revealed to still talk in subtitles. He has Album talk about her favorite metal bands, causing her to form a huge wall of text over her head, and then he uses it to hit Team 6's ice platform.

Coconut exploits the Ninja Prop trope to Team 1's advantage when Album is revealed to still talk in subtitles. He has Album talk about her favorite metal bands, causing her to form a huge wall of text over her head, and then he uses it to hit Team 6's ice platform.