Series / The Whitest Kids U' Know 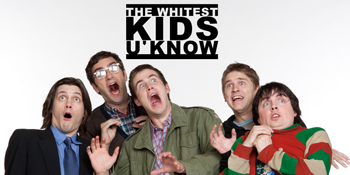 The Whitest Kids U Know is an uncensored sketch comedy show that began airing on Fuse TV (the former American feed of MuchMusic) in 2007, then switched to IFC in 2008. The cast members are Sam Brown, Zach Cregger, Timmy Williams, Darren Trumeter, and the late Trevor Moore. They're currently most famous for the "Slow Jerk" sketch, the "Abe Lincoln" sketch (in which Abe Lincoln is a loutish boor who annoys John Wilkes Booth to the point of assassinating him), and the "New Thing" sketch, which was (without the WKUK's permission) ripped off shamelessly by Budweiser. Most of their sketches fall under the following categories: Presidential Assassinations (with Zach as Abe Lincoln/Ronald Reagan/JFK, Trevor as John Wilkes Booth/John Hinckley/Lee Harvey Oswald, Sam as George H.W. Bush/Lyndon B. Johnson, and Darren as a Secret Service officer), Drag sketches (most often with Darren or Timmy as the girl), or just plain weird ones (Saturday, Opus, etc).

They've occasionally come into conflict with the higher-ups of Fuse (the censoring of swearing and sexual content led them to move the show to Fuse's then-sibling IFC) and even IFC (making them do 15-minute-long shows rather than half-hour long). But for the most part, they have full creative control of their sketches.

General tropes provided by the series:

Specific sketches from The Whitest Kids U Know give examples of: