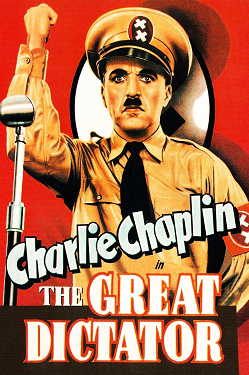 The Great Dictator is a famous Charlie Chaplin film about a certain European dictator who uses the Jewish people as a scapegoat for his country's problems and tries to ally himself with the republic of Bacteria, since both wish to annex the country in between them. At the same time, a World War I veteran with a case of Easy Amnesia — who happens to be a dead ringer for the dictator — returns to his barbershop in the Jewish ghetto to find out things aren't quite as nice as they used to be...

Chaplin planned and shot the film in 1939-1940 right during early World War II; France, Denmark and Norway were conquered during the filming, which may have influenced the final tone of the film. While Chaplin understood from first-hand accounts how hostile the Third Reich was to Jews, at the time of filming, he was ignorant of Hitler's desire to exterminate them and most of Eastern Europe in the near future (the Hungerplan was devised alongside planning for Operation Barbarossa later that year and the Final Solution in early 1942). After the war, Chaplin expressed some regret about the film, telling interviewers that he might not have made it if he'd known the whole story. That would be an artistic challenge Roberto Benigni would take up 50 years later with the Oscar winning Dramedy, Life Is Beautiful.

The Great Dictator was (of course) banned in Nazi Germany, although prints of the film still found their way into occupied Europe.note According to an eyewitness, Adolf Hitler obtained a copy of the film and watched it twice; when Chaplin found this out, he said that he would give anything to know what he thought of it. Britain had announced that they were going to ban the film while the film was in production (so that it wouldn't interfere with the country's appeasement policy with Nazi Germany), but when the film was released, Britain had entered the war against the Nazis, and the film couldn't be brought in fast enough; it ended up providing some badly needed laughs at a time where laughs were in short supply for Britain (and most of Europe).

Ironically, for all of the controversy surrounding it, The Great Dictator was not the first American anti-Nazi comedy film — Chaplin was upstaged by The Three Stooges with the short film You Nazty Spy! by nine months. It also wasn't the first anti-Hitler film of any sort — that honor goes to Hitler's Reign of Terror, released all the way back in 1934.note Not many films attacking the Nazi regime were released before America's entry into the war. The Hays Code technically forbade lampoons against public figures or world leaders and the studios were loathe at any rate to make any statements that might cause Hitler to ban their films in Germany, a lucrative market.

The film is also a landmark for Chaplin himself - it was his first all-sound film, released over a decade after the rest of Hollywood transitioned to sound. (In the meantime Chaplin had stubbornly made City Lights and Modern Times as silent films.) And although the barber is explicitly not the Tramp character, he nonetheless has the Tramp's physical appearance - baggy clothes, big shoes, cane, bowler hat and that moustache - and thus this film marks the final time Chaplin would invoke some version of this character on screen.

For the Sacha Baron Cohen movie, see The Dictator, which is also a satire.

"The Phooey has just referred to the following tropes..."