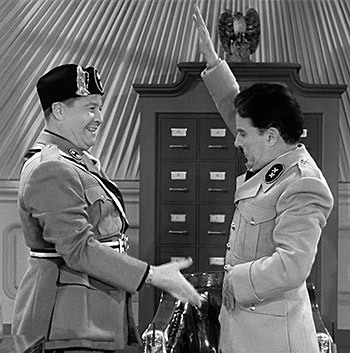 Alice is meeting Bob for the first time. They say hello to one another, then move closer to greet one another. Alice holds out her hand for a handshake, but Bob spreads his arms to give her a hug. Hilarity Ensues, along with awkwardness for all concerned.

The hug-handshake confusion is the most overt form of this gag, but it can be done with other confusions of the appropriate gesture to use (one character goes for a handshake and the other for a fist-bump or other Handshake Substitute; Bob kisses Alice on the cheek, to Alice's surprise; a French character goes to kiss an American character on each cheek; an American character goes for a handshake while an East Asian character bows; and so on and so forth). A variation is when both parties instead try to use the other culture's greeting out of courtesy, meaning well but still ending up with similar awkwardness. It's even possible to do this in sci-fi or fantasy works via the Cross-Cultural Handshake.

A stock gag in Cringe Comedy. Often found in White Dude, Black Dude routines, when the "white dude" goes for a handshake and the "black dude" goes for a Handshake Substitute. Compare Handshake Refusal, where one character outright refuses to shake the other's hand, deliberately creating an awkward situation; or The Unhug, which is awkward for both parties. Definitely Truth in Television: just about everyone has experienced this at least once. It's particularly likely to happen when people of radically different cultures meet.