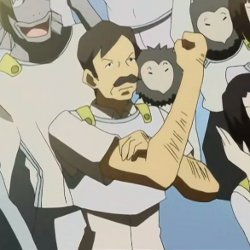 A common Japanese gesture when preparing to take on a difficult task is to "make a muscle" and rub one's biceps, emphasizing strength. "Yoshi!" ("OK!", or "Alright!") is frequently said with a determined expression when doing this, whereas Westerners usually just grunt. Compare to the "Rosie the Riveter"

The gesture is frequently misinterpreted in other places, as it looks very similar to the obscene "bras d'honneur" gesture, equivalent to Flipping the Bird, used in much of Eastern and Southern Europe and Latin America.note This is slightly less likely in moving pictures, as in the "bras d'honneur" one puts the hand on the biceps first and then bends the arm