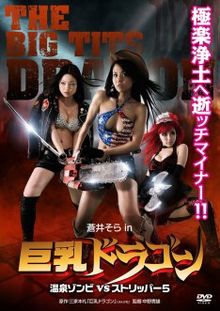 Pictured - Everything you need to know about this movie
Advertisement:

This movie involves two things. Guess what they are.

Based on an obscure manga by mangaka Rei Mikamoto, Big Tits Zombie (aka Big Tits Dragon) is a Japanese comedy-action-horror film starring adult actress Sora Aoi. Aoi is an exotic dancer named Rena Jodo who has returned from Mexico and is now staying with four other strippers: Ginko, Dana, Nene, and Maria. They struggle to get by in their lonely club that receives few customers. When their boss closes the club, they are forced to live in a local bath house and entertain gangsters for a job. Hilarity Ensues... until is turns out that the bath house was previously owned by occultists who committed suicide.

Maria soon finds the Book of the Dead in the basement and accidentally unleashes a horde of zombies. Of course, it's up to this Ragtag Bunch of Misfits to stop the Zombie Apocalypse.