All spoilers will be left unmarked. You Have Been Warned! 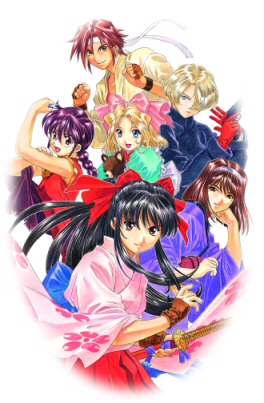 Sakura Wars is a video game franchise created by Oji Hiroi of Red Entertainment and developed by Sega, which started in 1996. The games eventually branched out into OVAs, several TV series and a film. The games, now at their sixth release in the series, are a combination of Dating Sim and tactical combat, and have a near-fanatical following. Though most have seen no release outside Japan, the first two games were officially released in Russia in 2006 and 2008 respectively, and the fifth game was released in North America on March 30, 2010. The first four games were also released in Chinese.

Set in an alternate world, it is the 1920s. Instead of World War I, in 1918 an occult conflict called the Demon Wars pitted hellish creatures from another plane of existence against a plucky Four Man Band. Although the humans won, half the Band was lost. With international approval, Japan continues advancing its groundbreaking steam-powered technology, preparing for the demons' inevitable return.

In Japan, these preparations take the form of the Imperial Combat Revue. The Hanagumi ("Flower Division") is their elite squad of warriors, equipped with the steam-powered battle armor called kohbu, and the weapons and skills needed to fight the demons when they return. Because of a quirk in the part-magical technology of the kohbu, all the members of the Flower Division (save for their commanding officer) are women. Taking advantage of a pun in Japanese ("Teikokukagekidan" can mean "Imperial Opera Revue" or "Imperial Combat Revue", depending on the kanji used), the Flower Division make their headquarters underneath the Imperial Theater in Tokyo. When they are not fighting the forces of Hell, they maintain their cover identities as the cast and crew of the theater, allowing for a lot of music in between the battle scenes, and no small amount of incidental comedy. As the series progressed, the successes of the Flower Division led to the establishment of additional teams in other locations, including the Paris and New York Combat Revues. Despite the Flower Division's purpose as a combat unit, Sakura Wars spends surprisingly little time in battle. Instead it focuses on first the background and establishment of Wars Imperial Defense Forces, the recruitment of its members, and follows that with close studies of the various characters.

There are two OVA series animated by Radix covering the Tokyo Flower Division; the first was released in 1997 and is a prequel depicting the formation of the Flower Division, while the second series was released in 1999 and barely even mentions the demon conflict, instead focusing entirely on specific incidents within the lives of the Flower Division and jumping among the time periods covered in the various video games. The latter series is more self-contained than the first, and showcase the sense of "family" among the Flower Division. In both series the animation is outstanding, and the English dubs (produced by ADV Films) are quite good, featuring a cast that manages to deliver the multinational/multicultural feel of the team quite well. There are also a third and fourth set of OVAs, focusing on the new Flower Division team established in Paris, France. The third series has been licensed by Funimation, and was released under the name Sakura Taisen: École de Paris in North America in late 2005. The fourth series is named Sakura Taisen: Le Nouveau Paris, and continues following the Paris Flower Division. The fifth series of OVAs (based appropriately enough on the fifth game) is titled New York, New York, Produced by AIC (who assisted with animation on the fifth game) with a new adventure for the New York-based Star Division.

In addition to the OVAs, there is a movie, released in 2001. Like the episodes of the second series, the film is also a self-contained story in the same continuity (no Alternate Continuity here, thankfully) and leaves no hanging plot threads behind; the new character introduced here even goes on to appear in the later Sakura Wars V game. The movie also substantially expands the world of Sakura Wars beyond Japan, exploring in greater depth the dynamics of the prototype team fielded in wartime Europe. The movie takes place just after the end of the third game (Paris) and before the beginning of the fourth (which ended the "Tokyo arc"). This makes extensive use of CGI effects, particularly for the kohbu. Pioneer Entertainment licensed and dubbed the movie instead of ADV Films (Note: Funimation now owns the license to the film, along with other titles by Geneon), along with different voice actors and fewer attempts to provide diverse accents that ADV did.

There is also a TV series version which is an Alternate Continuity from the OVAs. Produced by Madhouse and aired in Japan in 2000, it follows the plotline of the first game but with multiple (and major) alterations, particularly in the personalities of the villains and some of the principals themselves. The TV series bears an overall darker tone than even the original games.

The manga, which was released in Japan from 2003 to 2008 and adapts the first game again, without the drastic alterations of the TV series. Most of it has been released in English by Tokyopop. However, a few volumes were not translated since the company ended a majority of its operations. A motion comic production of the manga adaptations is done by TOMOTOON. However, you can only get it in Japan.

An enjoyable, fun, and well-heeled franchise, Sakura Wars is a legendary license and is one of the few franchises to make a truly successful expansion into nearly every form of media. The series' voice actors regularly performed (up to 2008) in sold-out Broadway-style "live shows" and radio dramas (all set in the Sakura Wars universe), and a Sakura Wars cafe/store stood in the SEGA amusement center in Tokyo until its closing in March 2008.

An attempt to localize the series for digital distribution has sprung

for the Saturn version of the first Sakura Wars, lead by Iwakura Productions.

Ichiro Ogami, Sakura Shinguji, Erica Fontaine, and Gemini Sunrise also made an appearance in Project × Zone, a crossover game produced by Bandai Namco Entertainment, Sega, and Capcom. They return for the sequel as well, bringing none other than Segata Sanshiro with them.

At SEGA FES 2018 (over a decade after the release of Sakura Wars V), a sixth mainline entry was finally announced, also titled Sakura Wars and released in December 2019 in Japan, with an international release in April 2020. An animated adaptation of the game was announced at the 2019 Tokyo Game Show, as well, and also premiered in April 2020.

Character tropes go on to the Character Sheet.

Nothing to do with the manga called Sakura Discord.