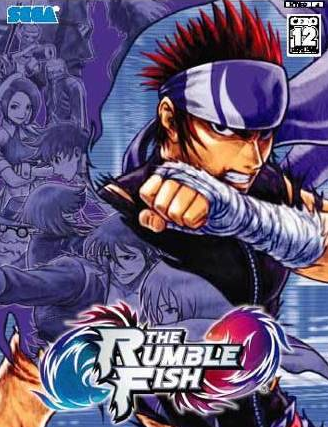 The Rumble Fish is a 2D Fighting Game developed by Dimps and published by Sega Sammy Holdings. It was originally released in 2004 for the Atomiswave arcade platform and was later ported to the PlayStation 2 on March 17, 2005. A sequel, The Rumble Fish 2, was also released in 2005 with numerous balance changes from the first game (two characters from this game have also made an appearance on the first game's console version as early promotion).
Advertisement:

During the turn of the 21st century, a large-scale natural disaster tears through the eastern side of an unverified country, destroying its economical and political operations and taking a total of 158,000 lives. A prominent corporation in the series, called PROBE-NEXUS, moves its base of operations to the ruined east side and begins reconstructing the area. The rebuilt area flourishes again as it becomes a wealthy and busy city known as Zone Prime, which serves as the backdrop for many locales in the game.

In the underground of Zone Prime, PROBE-NEXUS also sponsors a tournament known as the Fight for Survival, or F.F.S., where fighters are gathered from the city's slums and compete for sport. The first Rumble Fish game follows the fifth F.F.S. tournament.

However, as of 2012, for the NESiCAXLive, The Rumble Fish 2 was eventually re-released with an updated 1.1 version, which does several more balance changes.

Not to be confused with Rumble Fish, the S.E. Hinton novel or the film directed by Francis Ford Coppola based on it.

The Rumble Fishprovides examples of the following tropes: