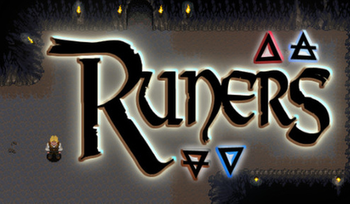 Runers is a top-down 2D Roguelike created by LGK Games (short for Let's Get Kraken, a team of two college friends) and published by Mastertronic Group for PC on Steam in 2014. In it, the player, who can be any one of 20 races and 20 classes, is tasked with getting to the bottom of a 10-floor dungeon. They can run into more than 100 enemy varieties and encounter 10 out of 15 bosses on their way.

The key part of the game is its Spell Crafting system, which is accomplished through combining the titular runes. There are 10 types of runes - Fire, Water, Air, Earth, Light, Dark, Speed, Shock, Mind and Entropy. While you only start with one Rune at first, you'll soon get more, and will be able to start combining them. Each spell can consist of up to three runes, thus making for a total of 285 spells. However, each combination of runes must also be sealed with a two-rune or three-rune "combiner", which are quite rare.