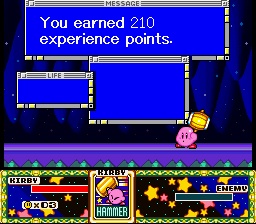 (Not that it matters.)
Advertisement:

You're not playing an RPG. However, your character gains experience and levels as if you were. Instead of being a mere test of skill, in which the only thing that makes the game easier or harder is your ability as a player, your control over the Player Character is abstracted so that you have a degree of customizability over them. Often their talents improve the more you practice or train, maybe there's a class system, or some sort of system that allows for tweakable abilities.

Well-implemented, this can give a game added depth and customizability, or allow players who might not be as good to spend a little time leveling up to make the game easier, creating a roundabout way to introduce Difficulty Levels to the game. Badly implemented, it seems like a tacked-on attempt to appeal to a broader demographic, or to be seen (critically) as a better game.

These have been around almost as long as console and computer RPGs have, and they became more common during the mid-90s, at which time a HUGE number of developers seemed to want to add more complexity to their games, and the hoped for increased sales thanks to the prestige that came from having "RPG Elements" printed on the back of the box, even if the elements in question weren't anything more than Hit Points.

An interesting outlier is the numerical display of an attack's damage (measured in Hit Points); while not an RPG element in and of itself, as a visual indicator it's strongly associated with the RPG genre nonetheless, as it implies there's a behind-the-scenes damage formula (incorporating attack and defense powers) in play.

It seems to occur most often in FPSs, strategy games (usually Veteran Unit), sports sims, Action-Adventure games, and the occasional Fighting Game, especially those that allow you to build your own character from the ground up. Compare Common Tactical Gameplay Elements. Not to be confused with Elemental Powers used in RPGs.